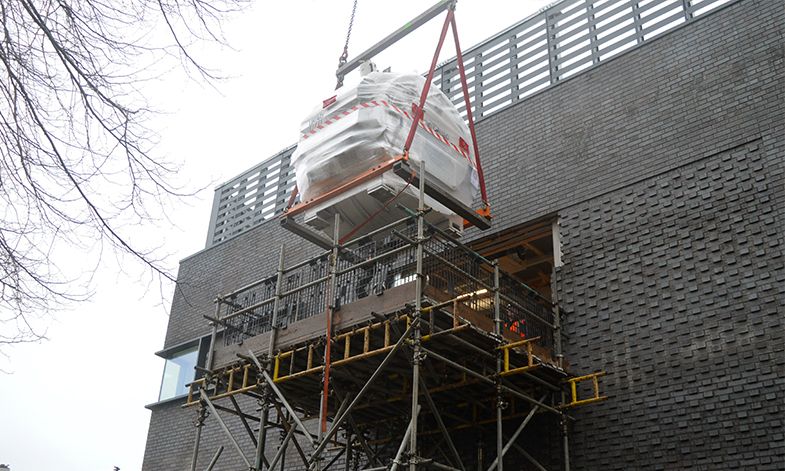 Just over a year after hitting an ambitious £2 million fundraising target, the University of Sheffield took delivery of its new PET-MRI scanner.

The arrival of the Sheffield Scanner means the construction of the facility is now close to completion. After a period of commissioning and testing, the scanner is expected to be operational in March, and will be celebrated with an opening ceremony later this year.

The new facility will enhance the University’s medical research, with academics able to take exciting discoveries and breakthroughs from the laboratories into clinical trials to give patients in Yorkshire access to ground-breaking new treatments.

The delivery was made possible by the Sheffield Scanner appeal – launched by the University of Sheffield in 2017 – which received more than 11,000 generous donations from staff, alumni and students of the University, as well as members of the public from across the region.

The facility will house one of only eight PET-MRI scanners in the UK – and the first in Yorkshire – and its use will be focused on a number of clinical research areas.

Researchers hope that the scanner will speed up the diagnosis of, and lead to the development of new treatments for some of the most devastating diseases; including Motor Neurone Disease, Parkinson’s disease, Alzheimer’s, dementia, Multiple Sclerosis and cancer.

The Sheffield Scanner appeal was led by Professor Dame Pamela Shaw, Director of the University’s Sheffield Institute for Translational Neuroscience and its Neuroscience Institute. She said: “It has been truly inspiring to witness the fundraising efforts which made this innovative facility possible and I’d like to extend my thanks to everyone who contributed to the appeal.

“This revolutionary imaging technology will have a crucial impact on our understanding of some of most serious medical conditions, helping us to develop new solutions to treat them in the future.

“We are delighted to be one of a small number of global institutions with such advanced technology which will underpin the future of our neuroscience research. This will be the only PET-MRI scanner in Yorkshire, so it will be of great benefit to people in Sheffield and across the wider region.

“We hope that the pioneering research made possible by the scanner will have a global impact and benefit people across the world.”

The work of the neuroscientists forms part of the University of Sheffield’s Neuroscience Institute, which aims to bring academics together from across varied specialties, to translate scientific discoveries from the lab into pioneering treatments that will benefit people living with neurodegenerative diseases.